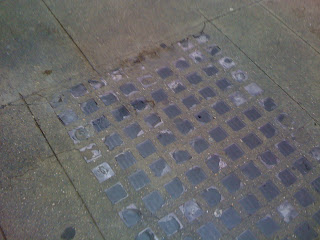 Photo Credit: ABJ Seattle Glass Online
May 2010, 1st & Marion
Seattle, WA
In elementary school we took a field trip to Pioneer Square and went on the Underground Tour.  I remember only three things only from that trip:

1. The tour guide called horse shit "puckey" and we spent a long time discussing why.
2. As we exited into an alley, we all stepped on a giant dead rat just outside the doorway.
3. The purple squares in the sidewalks in downtown Seattle are visible if you look up from the walkways underneath... they're skylights, and they're made of glass.

Photo Credit: Glassian
http://glassian.org/Prism/Vault/prisms.jpg
A history of vault lights is provided by glassian, the above photo shows what the prisms look like, (buy one if you ever see it for sale!): http://glassian.org/Prism/Vault/index.html#VVL
According to glassian, the purple glass squares are skylights and were used as a form of lighting in basements in the 1800s before electric light was used.  The idea was taken from ship decks and applied to city streets.  Found in cities all over the world, they are no longer used, and are in danger of disappearing because they are costly to replace.

In 2002, a section of sidewalk vaults in the Square were replaced with new, pre-purpled panels (the orignal glass was clear, and turned purple overtime due to UV exposure).  The project was federally funded and completed by Mid Mountain Contractors of Kirkland, WA.  http://northwest.construction.com/projects/04_BestOf/04_BestOfWashington.asp


The glass sidewalk prism lights are one of the unique elements in the District, and their retention is required. The Board maintains the right to require applicants for sidewalk repair to repair sidewalk prism light panels and individual prism lights that have deteriorated into a state of disrepair. (7/99)"
July 23, 2003.  www.seattle.gov/Neighborhoods/preservation/PioneerSquareGuidelines.pdf
However, in 2008, the new owners of a building at 240 2nd Ave S. proposed to fill in broken prism lights with cement, citing a precedence set by other building owners in the district:

"Ms. Nashem asked the applicant to speak about the prism lights in the sidewalk.

Mr. Chatfield said the photos show the condition of the two sets of prism lights; with the exception of about 6, the rest of the prism lights are shattered and damaged.  They proposed to fill openings with concrete to remove the trip hazard.  They are also looking at sourcing prism lights; precedence has been set as other buildings have been filled in with concrete."

During Public Comment at the meeting, the prism lights were brought up again:

"Sarajane Bellanca asked if we are agreeing to this new material because it is being painted and asked if this is going to be a new material for Pioneer Square.  She also expressed concerns about the prisms in the sidewalk; they were replaced at the Smith Tower and at Toshiro Kaplan so it is possible to do.  She didn’t like the idea of filling in the broken prisms with cement.  She didn’t hear a solution to returning the prisms to their original condition.

Mr. Chatfield they would just fill in the three or four that have popped out more from a liability issue.

Mr. Hasson agreed with Ms. Bellanca and said a decision needs to be made if applicant wants concrete or prism lights."

The meeting continued on, returning to the subject of the lights later:

"The Board discussed the replacement of the glass prisms.  The applicant is concerned with the liability and wants to fill the holes with cement.  Replacing individual prisms is not an option; the whole sidewalk panel would need to be replaced which is expensive but it has been done as evidenced at Smith Tower and Toshira Kaplan buildings.

Chris Gibbs, Manager at the Toshiro Kaplan lofts confirmed that glass panels were replaced around his building and supports replacing the panels as they have been done at his building.
Mr. Hasson said he would go with the concrete.

Mr. McConachie asked the Board if a motion could be moved to leave out a couple issues such as stucco, color, masonry testing and prisms and the applicant could come back with additional information."


The lights are beloved by city dwellers, but if broken can be a tripping hazard.  Filling individual broken cells with cement is the most cost-effective way to repair them.  However, whole panels can be replaced if the money is available to do so. 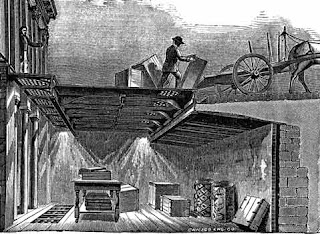 Photo Credit: Ian Mackey, http://www.islandnet.com/~ringuett/prism/report/prisms.htm
North of here, in Victoria, the prisms are also being considered by city government, as notes from a city council meeting in 2006 shows:

"Janis Ringuette – Sidewalk Prisms: Promoting as a downtown attraction and better preserving them
Thank you for allowing me to speak about Victoria’s sidewalk Prisms.  She wants to thank the people in the past who have saved them.  Today, most residents are unaware of this heritage feature.  Others
notice and walk over them.  There has been no written history or map of their locations.  This is an
interesting heritage feature that is overlooked and unappreciated.  Over the last three months, she has
compiled information for the City to produce a brochure.  People will be interested to learn about early
basements.  Prisms were installed in the early 1900s.  The glass was not coloured, it turned purple over
the years due to exposure to sun.  To install interpretive signs is inexpensive.  It would be great to light
the purple glass squares below at night.  The greatest concentration of prisms surrounds the Yarrow
Building.  They are open and accessible.  Lighting does not have to be expensive.  When the lights are
left on in the building basement, it will light-up the prisms.  Ideally, the lights should be connected with street lights.  There are over 11,000 prisms today.  There are no replacement glass blocks on hand.

When they are broken, they are filled with concrete.  Over 500 have been filled.  If one breaks, it should be replaced, not filled.  And Council should make this a high priority.  Other cities have found glass suppliers and restoration projects.  A city representative should send a sample off before we replicate.

We need to make restoration a long-term goal and place it on a future projects list.  When someone
applies for heritage grant/funding, they are considered.  Finally, it is costly to restore prisms so we should focus on preserving the remaining prisms.  On Fort and Broad Streets, many trucks drive over them and there are two big postal boxes on prisms that could be moved to concrete.

Councillor Madoff thanked Ms. Ringuette for her wonderful report.  This is a part of our heritage that
people may not be conscious of.  There are suggestions in her report to avoid wear and tear, and the
next step is sourcing the prisms.  There used to be a company here.  She would be very happy to continue to work with Ms. Ringuette on this project.

Councillor Thornton-Joe thanked Ms. Ringuette for all her effort in compiling this information.  She
recalled an article in the Times Colonist recently about the prisms.  This matter was before the Heritage Advisory Committee and received its support.  She has discussed this matter with the Downtown Residents’ Association and the General Manager of the Downtown Victoria Business Association, who are very excited about this project.  There have also been some discussions amongst City staff, and she was advised by the Heritage Planner that the prisms were added to the Heritage Registry on November 22, 1990.

Motion:
It was moved by Councillor Thornton-Joe, seconded by Councillor Madoff, that this matter be referred to the Heritage Planner for review and report to Committee of the Whole."

Cas Stachelberg and Chad Randl have published a National Park Service technical guide to preserving the glass prisms.  They outline the main problems:
"Repairing and restoring the historic vault lights presented a number of obstacles. These included finding an experienced contractor, locating suppliers and fabricators for the glass lenses and missing cast-iron panels, and keeping the overall cost of the restoration program reasonable."
They describe a success story that occurred in New York on Broadway, excerpted below.  The glass was fabricated by Blenko in West Virginia:
"To facilitate treatment and allow the sidewalks to remain unobstructed, the panels were removed and temporary steel plates were installed over the vaults. In the cast-iron contractor’s workshop, the surviving deteriorated glass lenses were removed, the cast iron stripped, cleaned and repainted, and new lenses set into the openings. Replacement lenses were cast by a specialty glass manufacturer, Blenko. The company had created glass molds for a vault light restoration several years prior and were now a regular supplier of various sized lenses for similar projects. A cast-iron foundry was contracted to fabricate two new panels to match the missing historic panels. Both new and repaired panels were delivered to the building site where the cast-iron specialist reinstalled them."
The fabrication story shows how improvements were made upon the historical process:
"Because vault lights are no longer manufactured, new custom panels had to be fabricated to replace the two missing when the project began. The contractor chose a surviving panel that was in good condition and sent it to a foundry in Alabama for use as a pattern. The foundry, which had worked on a number of vault light projects in the past, cast two new panels using techniques that had changed little in the past century. The original sample was packed in a bed of casting sand to make a three-dimensional mold. To account for shrinkage in the casting process (1/8” per foot), the mold was made slightly larger than the pattern ensuring that all panels, original and new, would be the same size. Vents and gates were created in the mold to allow the flow of molten iron and gas.

Although the method of casting new panels was nearly identical to the historical process, the composition of the cast-iron was altered to improve the material’s tensile strength. To produce what is referred to as ductile iron, the iron was combined with a slightly higher percentage of carbon (+/- 3.75% in the new cast-iron versus +/- 3.5% in the historical). Very small amounts of magnesium and graphite were also added to produce a material two to four times stronger than that of historical cast-iron. Following fabrication, the new panels were shipped to the contractor who set the new glass lenses and transported them to New York City for installation alongside the repaired panels."
They conclude:
"Vault lights are an important architectural features that are frequently overlooked and under maintained. Historically considered advantageous for the way in which they manipulated light and improved dark, potentially usable space, vault lights were also a visual complement to a building’s entrance and façade. Today, whether severely deteriorated, buried under layers of asphalt or missing altogether, this feature need not be lost forever. As the restoration project described in this Preservation Tech Note shows, sensitively rehabilitated vault lights can continue to provide architectural and historic character to the urban streetscape while serving their original function of naturally illuminating basement spaces."
Stachelberg, C. and Randl, C.  "Historic Glass Number 2:  Repair and Rehabilitation of Historic Sidewalk Vault Lights" NPS.  Accessed May 24, 2010.  http://www.nps.gov/history/hps/tps/technotes/ptn47/Contents.htm
Lauren
Share